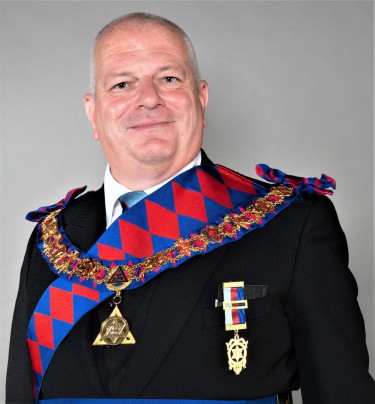 Most Excellent Grand Superintendent in and over

The Province of West Wales

Chapters at home are grouped as a Metropolitan area or Provinces (based on the old Counties) and Chapters overseas are grouped in Districts. Metropolitan, Provincial and District Grand Chapters are ruled over by a Grand Superintendent who is appointed by the First Grand Principal as his personal representative for the particular area.

The allegory of the exaltation ceremony is based on the Old Testament telling of the return to Jerusalem from the Babylonish captivity to rebuild the city and temple. In clearing the ground of the original temple for the foundations of the second temple, the candidate makes a number of discoveries which emphasise the centrality of God to man's life and existence and, without transgressing the bounds of religion, lead the candidate to a consideration of the nature of God and his personal relationship with Him, whatever his religion might be.

In England, the Royal Arch is considered to be the completion of "pure ancient Masonry". In the Craft the candidate is presented with a series of eminently practical principles and tenets which if he practises them he may hope to live a life pleasing to his God, however he worships him, and of service to his fellow man. But man is not simply a practical being, he has an essential spiritual aspect to his nature. That spiritual aspect is introduced in the Third Degree, in which the candidate is led to a contemplation of man's inevitable destiny, and becomes the central message of the Royal Arch. In that sense, "pure ancient Masonry" can be seen as a journey of self - knowledge and discovery with the Royal Arch completing the practical lessons of the Craft by a contemplation of man's spiritual nature, not replacing but reinforcing and supporting what he has learned from his religion.