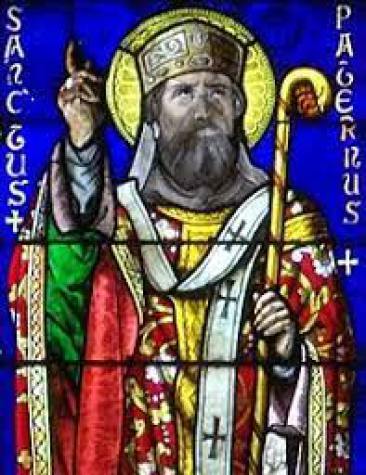 With the sad death of His Royal Highness the Duke of Edinburgh there has been much reflecting on his life and considering the many lasting legacies which will live on for very many years to come.  No doubt there is much to give thanks for in Prince Philip’s life and he will be celebrate and remembered in posterity – the epitome of a mason who ‘lived respected and died regretted’.

Like Freemasonry, the Church places considerable emphasis on the example and legacy of those who have gone before us.  Last Thursday (April 15th) the Church kept the Feast day of Paternus of Wales.  I have to be honest that when I read this in my lectionary I thought to myself ‘who on earth is this?!’  I obviously wasn’t awake at the time, because it is of course St Padarn, an important and significant character within our Province.

As with all Celtic saints, we know little about Padarn for certain.  He lived in the fifth to the sixth century during the glorious period in Wales known as the Age of the Saints.  It is believed that he was born and educated in South East Wales, but is famous for being the founder of the monastery of Llanbadarn Fawr, situated on the outskirts of Aberystwyth today.  Many of you will remember attending Provincial Church Services at the imposing church of St Padarn.

Padarn was both abbot and bishop of Llanbadarn Fawr for about twenty years which was a particularly long time in those days.  He was reputed to have successfully evangelised the surrounding countryside from his community, which was built on a sure foundation and thrived for many years after his death, as evidenced by the church we see today and the fact that he has not been forgotten in the mists of time.  St Padarn’s Life was written in Llanbadarn Fawr in about 1120 relying on the oral traditions handed down by the bretheren.

Interestingly Padarn appears to have been more closely associated with Roman civilisation than many other early Welsh saints.  While the direct effect of the Roman Empire on Wales was waning, the infrastructure remained.  The churches dedicated to St Padarn are primarily situated along two Roman roads, the main means of inland travel and communication at the time.  However travel by road was so difficult at that time (even worse than it is today!) and many journeys were taken by sea wherever possible.  Hence the reason for the close relationship between Welsh, Bretton, Cornish and Irish.

Next Wednesday (April 21st) the Church keeps the Feast of another notable Welsh saint, Beuno.  He is arguably North Wales’ most significant saint, and while his Life was not written until the fourteenth century, again it is likely to contain genuine elements.  He is reputed to have been born and educated in Herefordshire in the sixth century; the existence of a village called Llanfeuno lends credence to this.  His principal monastery was however founded in North West Wales, not far from the sea, at Clynnog Fawr, where another impressive church stands to this day.

Beuno appears to have travelled quite a bit in central East Wales and North Wales where a number of churches are dedicated to him.  The highest concentration however is to be found on Anglesey and the Llyn Peninsular along what became a very important and well-trodden pilgrimage route to the island where twenty thousand saints are reputed to be buried - Enlli, Bardsey Island.  In the twelfth century Pope Callixtus II proclaimed that three pilgrimages to Bardsey were equivalent to one to the most holy city of Jerusalem itself.

Beuno was buried at Clynnog Fawr church and a number of miracles were recorded over the centuries.  The memory of these miracles miraculously (!) survived the Reformation, much to the irritation and concern of the reforming Protestants.  As late as the 1770s there are records of children who were ill being bathed in the holy well at the church and being left at his tomb overnight.  Committed faith or pagan superstition, who can say?

Many later monastic communities, such as the Benedictines and, especially in this part of the world, the Cistercians looked to found their communities in remote, isolated locations.  Places where they could escape from the secular world, and devote their entire being to their spiritual life and worship of God.  Both St Padarn and St Beuno however appear to have taken a far more hands on approach, no doubt reflecting the limited impact which the Christian faith had on this country at that time.

It is sobering to look back so far and to see the impact which St Padarn and St Beuno have had on our country over so many centuries, and continue to do so.  These were ordinary men who set about the work committed to them with fervency and zeal, and while no doubt God was with them in their labours, they made a significant and lasting impression.  While we may not have such great and privileged tasks entrusted to us, each one of us has the potential to make a real difference to the lives of others if we chose do our work to the best of our skill and ability.

Communication was also clearly important and critical in the success of St Padarn and St Beuno.  In a time when communication was so difficult they had to think very carefully about how they could relay their message to the natives of their communities.  Today communication is very easy indeed, perhaps too easy!  Too often we communicated without thinking because it is so easy.  But to communicate effectively we have to make sure that what we say is understood by those we are communicating with.  I could happily ramble on in lawyer’s Latin and legalease and the majority of people wouldn’t have an idea what I was on about!

When we communicate, not only do we have to be clear in our own mind what we are going to say, but we also have to think about how those receiving the communication are going to accept it.  In such a diverse age that is not as easy as it sounds.  Communicating great and enduring truths in an age when so many things are superficial and transient is a real challenge.  The starting point however is that we have to meet people where they are, and walk with them, supporting them and encouraging them as we strive to share with them the treasures which we have inherited.

This hymn was composed by the Rt Rev Timothy Rees (1874-1939), Bishop of Llandaf, and speaks of the toils of those early Welsh saints, and the work which continues today.  I have to be honest that I have amended the named saints for my own purposes but I don’t think that it has affected the rhythm of the poetry!

Lord, who in thy perfect wisdom

Working out thy changeless purpose

In a world of ceaseless change;

Thou didst form our ancient nation,

To unfold in it a purpose

To thy glory and thy praise.

To our shores remote, benighted,

Barrier of the western waves,

Tidings in thy love thou sentest,

Tidings of the cross that saves.

Men of courage strove and suffered

Here thy Holy Church to plant;

Glorious in the roll of heroes

Shines the name of Dewi Sant.

Lord, we hold in veneration

All the Saints this land has known,

Standing now around thy throne:

All the gallant saintly band,

Who of old by prayer and labour

Hallowed all the fatherland.

Every change and chance above;

Witness to thy changeless love.

Vision, grant us, Lord, and courage

To fulfil thy work begun;

In the Church, and in the nation,

Lord of Lords, thy will be done.

O God, whom the glorious companies of the redeemed adore, assembled from all times and places of thy dominion: we praise thee for the saints of this our land who stand before the throne and serve thee day and night in thy holy temple; beseeching thee that we also may be numbered among them that work thy righteousness and see thy face.  So mote it be.