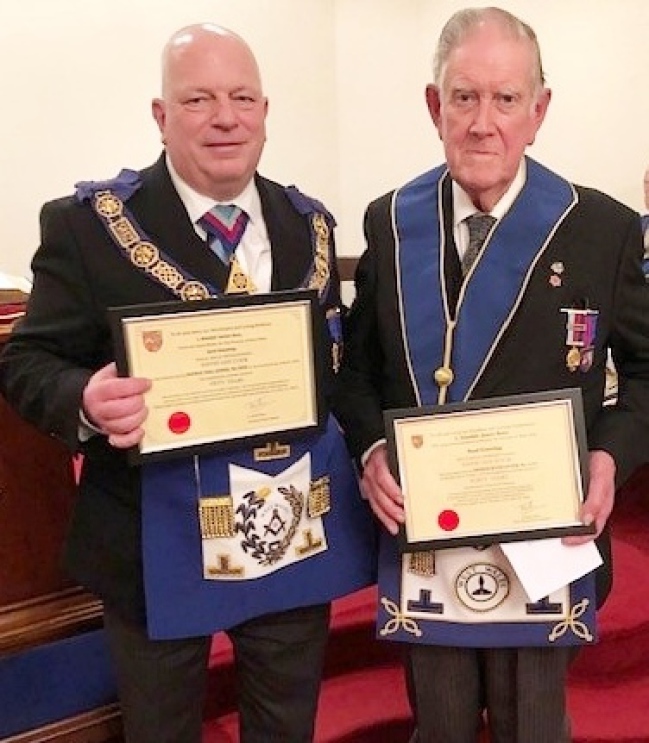 It is a great pleasure to be here with you this evening to present W Bro David Ian Cook with a certificate and badge to recognise 50 years faithful service to freemasonry.

W Bro David, you were a very senior mason when I first met you. You have been a stalwart and one of the immovable jewels of Tenby Lodge since the 1970’s and I am honoured to be the one making the presentation this evening.

I would also like to thank you for giving me some background facts about your early masonic career. I am sure in the future, Provincial Grand Masters will be able to press a button and a ready-made address will pop out from Hermes, with all the relevant information. For now, I have several different data sources to refer to and as a former lodge and provincial secretary, looking at old records is a great pleasure. W Bro David, it would be fair to say that your early masonic career didn’t go that well. In the 1960’s you were a trainee manager with FW Woolworth and despite a desire to join freemasonry, it wasn’t easy to join a lodge because your work meant you were moving at regular intervals.

You were first interviewed by a lodge in Waltham Abbey in Essex, but you were moved to the branch in Margate, Kent before you could be Initiated. For those of you whose southeast England geography is a bit hazy, even today with motorways and modern cars that is a journey of 85 miles and an hour and 40 minutes.

You were then moved to the Medway towns and were interviewed by a lodge in Chatham, but once again you were moved before you could be initiated.

It was not until you left FW Woolworth and joined a supermarket group that your life became a bit more stable, and you were finally able to join Avenue Hall Lodge in Penge, on 14th March 1970. I was four and a half! Your work schedule still prevented you from getting too involved in the ceremonial of the lodge, but you were a regular attender and served the lodge as a Steward.

You joined Tenby Lodge on 28th March 1977 as a keen 38-year-old Master Mason. You served the Tenby Lodge as Worshipful Master in 1987 and have held many offices in the lodge, including Assistant Director of Ceremonies and of course most recently you have spent many years as the lodge chaplain.

In the Craft Province of West Wales, you were first appointed to Provincial Rank in 1994 and in 2008, you were selected by the incoming Provincial Grand Master, RW Bro Eric Mock to be his very first Provincial Senior Grand Warden.

Excellent Companion David, you were Exalted into the Dinbych Chapter no 1177 on 3rd October 1979 and went on to serve the Chapter as Most Excellent Zerubbabel in 1991. You have held several offices in the Chapter, including Assistant Scribe Ezra and you have been Assistant Director of Ceremonies for many years.

In the Royal Arch Province, according to the old provincial database, you were first appointed to Provincial Rank in 1992. You were promoted to the rank of Past Provincial Scribe Nehemiah in 1998. You went on to serve the province as 3rd Provincial Grand Principal in 2012. I remember it well, because I was the new kid on the block as Provincial Assistant Grand Scribe Ezra.

W Bro David, you put in your note about your early masonic experiences that you didn’t think your service to the Craft and Royal Arch counted as a career.

Well David, I beg to differ. You have been a Craft Freemason for nearly 52 Years and a Royal Arch Mason for 42. That makes a total of 94 years loyal service to pure Antient Masonry.

Not only have you been a stalwart of Tenby Lodge and Dinbych Chapter since coming to Tenby in 1977, but you have also held the highest offices in the Province of West Wales too.

You are a fine example to us all, both as a man and a freemason.