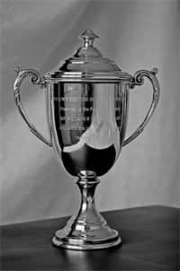 The DKW Cup encourages inter-visiting between Universities Scheme Lodges and furthers the goals of fraternity and togetherness.

The aim of the University Scheme 2021 Challenge in 2021 is for the cup (don't tell anyone, but it's actually a replica) to visit each of the University Scheme Lodges in England and Wales, covering a total of 2021 miles in the process. In addition to reconnecting, reenergising, and reinvigorating our Freemasonry, the challenge is also raising money for The Duke of Edinburgh Award Fund in memory of the recently departed Duke of Edinburgh, a lifelong freemason.

The brethren of Saint Padarn Lodge were accompanied by guest walkers from across the Province and Lady Masons from Builth Wells. Also in attendance were the Provincial Grand Master, RW Bro James Ross and Provincial Grand Charity Steward, W Bro Dirk den-Hartog. The happy band of walkers were blessed with glorious sunshine and set off from the bandstand on Aberystwyth Promenade at 10am on Friday 2nd July 2021. As tradition dictates the walkers headed towards Constitution Hill to "kick the bar". Having kicked the bar, they headed back past the bandstand towards the harbour, where there was a short break for some well-earned refreshments. Relaxed and refreshed the walkers headed back along the prom to the bandstand to finish the walk. The DKW Cup was then transported to North Wales to continue its long journey.

The cup is scheduled to return to UGLE in Great Queen Street on Wednesday 8th September 2021 in time for the first Quarterly Communication of the new season.