The Many Faces of Glan Davies 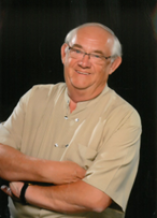 Glan Davies is one of the best-known comedians and actors within the Welsh entertainment industry. Born in Brynaman in1944, the son of a miner who was also secretary of the local branch of the Welsh Labour party. He attended Ammanford Technical College and left at the age of 15 to pursue a career as a surveyor. In 1970 he moved to Aberystwyth to work for various construction companies before eventually becoming a Chief Executive. In recent years he has run a very successful bus tour company. 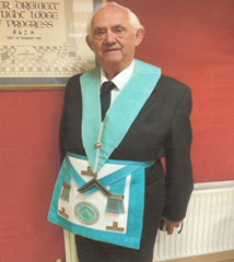 He is a member of the Dewi Sant Lodge in Bridgend and is the current Worshipful Master of the Peter Drewett Lodge meeting in Narberth.

He is also one of the founder members of Cyfrinfa y Tair Sir (The Welsh language lodge covering the 3 counties of the West Wales Province) which was consecrated in October and meets in Lampeter. He is the inaugural Lodge Almoner having been appointed by the Primus Master, W.Bro Emyr Davies, no relation.

A point of note. W.Bro Glan has always believed in taking his time and steady progress. He attained the chair of the Peter Drewett Lodge on the 18th June 2022, a period of nearly 24 years after he was initiated. 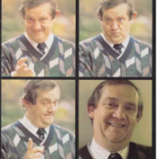 His interest in the world of Acting began when he was 9 years old with the Capel Moria Drama party where they competed and won several Urdd Eisteddfods. Glan was also a member of Grwp Bois Brynaman with Dafydd Iwan and the Diliau who raised money towards good causes.

He has spent his life entertaining people - firstly with the chapel, the Urdd and then as a leader of merry nights and pop pinnacles, most recently on the Noson Lawen series.

He has acted in several drama series including the character 'Clem' in Pobol y Cwm and Hinterland . He has worked with Sian Phillips , Ronnie Barker, Ken Dodd , Little and Large, Mike Doyle and Max Boyce . He has presented television programs from the 'Hob y Deri Dando' period when broadcast from the old King's Hall, Aberystwyth.

He does a lot of work for local and national charities. He has also raised money for Children in Need and various health charities. He is one of three people who has trained over 700 people in Ceredigion on how to save a life in the Community by means of CPR and the use of defibrillators. To date he has presented over 70 of these lifesaving machines to various communities within the area of Ceredigion.

At the Tregaron National Eisteddfod, the Eisteddfod Committee were pleased to announce that at this years ceremonial that they would bestow on W.Bro Glan, the Blue Robe in acknowledgement of his contribution to the Welsh language, the Arts and public life in Wales. It also recognises his long term commitment in developing and promoting his respective field.

For reference, Gorsedd Cymru, or simply the Gorsedd or the Orsedd (Welsh: yr Orsedd), is a society of Welsh-language poets, performers, writers and musicians.

A man of many faces, many talents and a huge contribution to local society.