Tenby's Master Presents Cheque to a Charity Close to his Heart 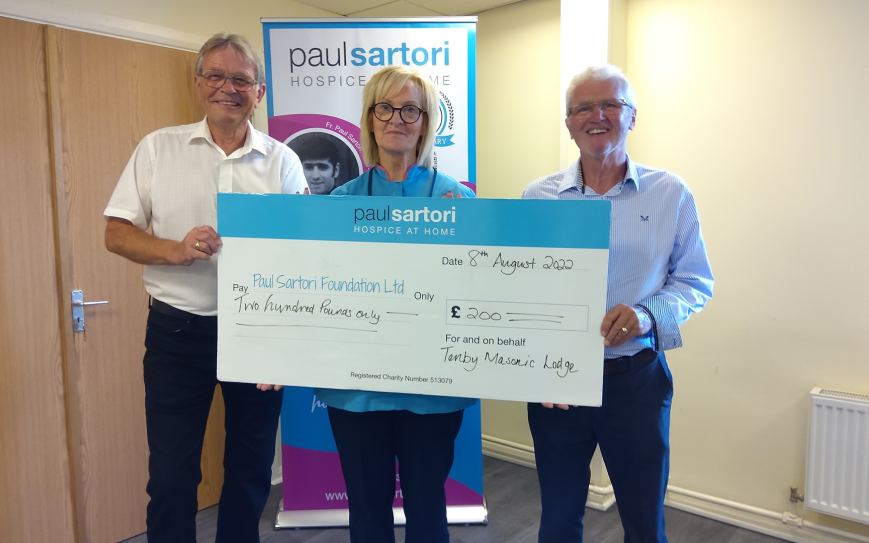 The tradition at Tenby Lodge Installation meetings is for the raffle proceeds at the festive board to be donated to a charity nominated by the incoming Master, so when W.Bro. Brian Miller was installed as Master of the lodge for a second time earlier in the year, he was only ever going to choose one charity to receive the £200 raised.

When Brian’s dear wife Jean was diagnosed with a brain tumour in 2012, he was devastated. As the illness progressed, he realised that he would need professional assistance, so for practical and moral support he turned to the Paul Sartori Foundation.

Jean sadly succumbed to the illness in 2014, and Brian now says that he does not know how he would have managed without the wonderful support and nursing care provided by Paul Sartori volunteers. He has remained friends with some of them to this day and has often joined them on organised walks to raise funds for the Foundation.

His involvement in Freemasonry was understandably put on hold during his wife’s illness, and after while he came to terms with his terrible loss, but in more recent years he has made a happy return to Masonic activity and was awarded active Craft rank as Provincial Senior Grand Deacon in 2019. He has also found time to indulge in his two other great passions…. playing golf and driving his immaculate Morgan sports car!

Brian and lodge charity steward W.Bro. Steve Thurgood recently visited the Foundation’s headquarters in Haverfordwest where Clinical Coordinator Pat Coombs and Community Fundraiser Toni Dorkings very warmly received him, both of whom he knows very well. He and Steve were given a tour of the impressive building and its fantastic facilities including an extensive equipment store, treatment areas, meeting rooms and comfortable rooms for counselling, which is offered not only to patients and their families but also to staff and volunteers.