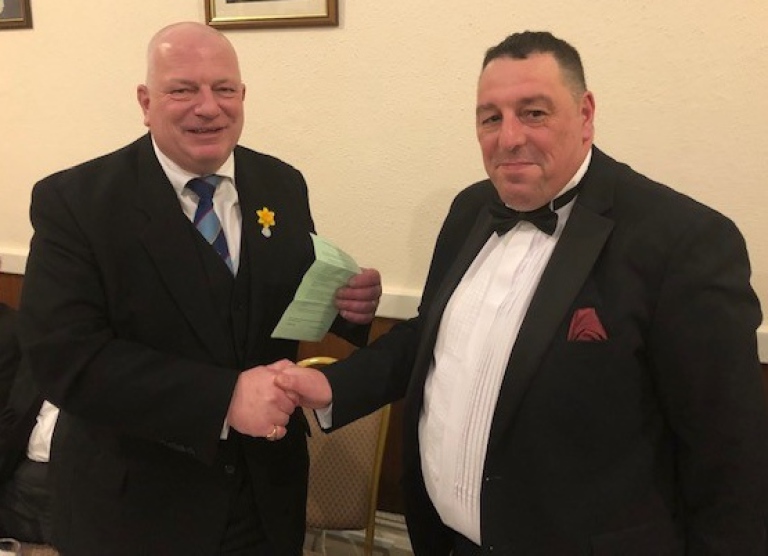 At the proclamation ceremony of St David's Lodge No. 366 held at Milford Haven on Tuesday, 1st March the Provincial Grand Master R.W. Bro. James Ross was pleased to receive a donation of £2,000 towards the Lodge 2026 Festival target from the Master of the Lodge W. Bro. Damian Jenkins. The Master is just entering his third year in the chair.  However, for obvious reasons, the brethren of the Lodge believe that he has not yet had a "proper" year as Master and hope that this year he gets that opportunity.

Earlier in the day, in the temple, the brethren and visitors took part in a celebration of 200 years of Freemasonry at the St. David's Lodge where a very interesting talk was given by Bro. Gordon Smith who outlined the history of the Lodge, its founding members and what Freemasonry would have been like back in 1821.

The P.G.M. then presented each of the members with a commerative badge and in return received one himself from the Worshipful Master.

A snippet of the talk is reproduced below with the kind consent of the author:

............Of the original 24  who made the initial request, 6 signed the petition to UGLE  it is worth reading out their names today

John Grant was installed as our first W.M. He was not active and appeared to specialise in openings and closings.  He was also a stickler for order and our first bylaws were written into the back of the first minute book in 1821.

On Sept 3 1821 , 7 months into existence,  the newly founded Lodge was disturbed by the arrival at Hakin Point of the  King George IV on his way back from Ireland.  The brethren were roused at 4am to welcome him and were placed in the middle of the escort guard.  The King reportedly saluted them in a most unique manner. The brethren were so impressed that after the visit they requested the lodge be renamed to ” St Davids Loyal Lodge of Geo IV”.  This title was used  frequently through the first years of the Lodge  but appears to have died out c1832.

The second Master was Lewis Fitzmaurice installed 3 Jan. 1822.  Fitzmaurice was a scion of a noble Irish family, the Earls of Kerry, and had 20 childern so masonry was not his only interest.  He was commander of HM Brig Trusty and left soon after his installation appointing W Bro Byres into his position

In 1828 the first recorded feasts to celebrate St John’s day. Lots of feasting and marching.

1834 there appears to have been some unharmony in Loyal Welsh as 11 members of LWL joined St David’s.

Numbers continued to increase. In 1838 there were 17 members plus unnumbered entered apprentices and fellow crafts

In 1838 probably to celebrate the coronation of Queen Victoria the lodge processed from The Nelson Hotel to St Catherines chapel. More feasting.

The Rev. Bloxham of LWL preached the sermon and was rewarded with honorary membership of 366.  There were no members from Haverfordwest and this might point to the demise of Lodge 81 at this time.

Double degrees appeared in 1843 the sons of Edward Pritchett, both lewises.. More feasting.

1841 tracing boards presented to the Lodge by Bro. Wm. Ganett.

In 1842 things started to get serious when the lodge purchased a copy of “Ceremonies of Initiation, Passing and Raising with Duties for Officers, opening and closing, for the sum of 1 guinea

1884 Bros. Griffiths, Roberts and Baldwin presented the pedestals to mark the opening of the new lodge.

1921 Old Priory was formed to satisfy the needs of an ever increasing numbers and to cater for need for a  lodge for returning servicemen and the camaraderie they missed.