In the autumn of 2015 Peterwell Lodge was contacted by Oliver Griffiths-Salter, a 15 year old pupil at Ysgol Bro Pedr in Lampeter.  Oliver was born with a genetic condition which caused frequent dislocations of his joints.  When he was 13 he contracted a serious illness which resulted in him being permanently confined to a wheelchair.  He confessed to not being sporty before his illness but had since discovered a love of, and talent for, wheelchair basketball which resulted in him playing for Wales in his age group. 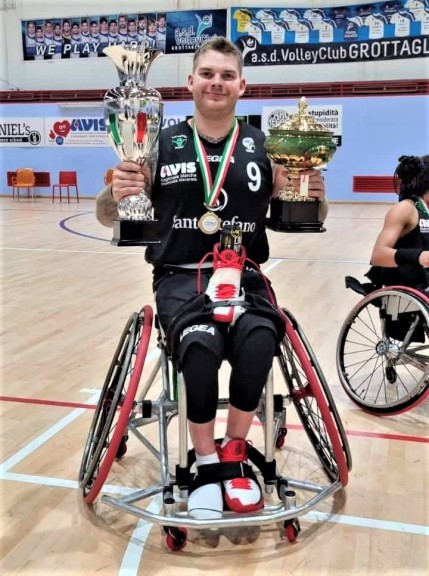 The one thing he lacked was a specialised chair, which would cost £4010, built to his specifications, hence the appeal to Peterwell Lodge for financial assistance.  The Lodge were very happy to support Oliver’s request, a figure of £500 was agreed and the Province was approached for further help which was forthcoming.  The chair was duly purchased with over 90% of the cost being met by West Wales Freemasons.

Our assistance 6 years ago has certainly paid dividends.  Oliver now represents Wales and Great Britain at junior level and is part of the GB development programme. He is now playing professional wheelchair basketball in Italy where his team have just won a prestigious national competition.

The photos say it all.