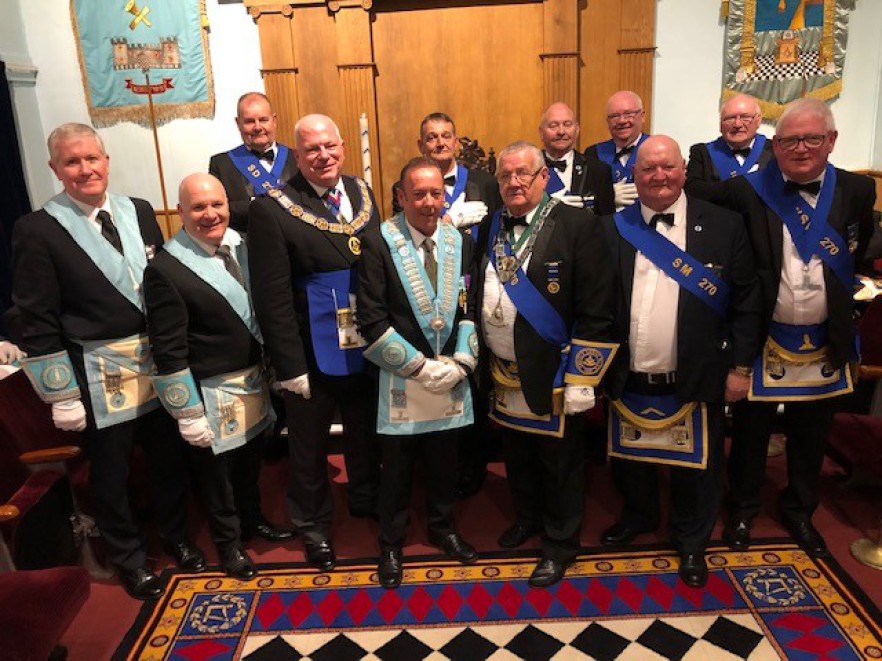 The Aeron Lodge No.7208 held a special meeting on Friday 25th March 2022, when a deputation of eight Scottish brethren from Lodge Thistle No.270 arrived to conduct a demonstration of the 3rd degree ceremony (Scottish Ritual).

The reason for the visit was to celebrate the 50-year link between the Lodges.

It might be beneficial to give a brief history of how this link between the Aeron and Thistle Lodges came about.

On the 24thApril 1969, three brethren from Lodge Thistle namely, John Fairley, John Porter, and Bill Porter, came down to our domestic meeting, as guests of Lewis Donald Evans, one of our New Quay members and Master of the Lodge in 1966/67. There was a return visit to Thistle Lodge by three Aeron Brethren the following year namely, Frederick William Moulton, Daniel Giraldus Harries, and Thomas John Adams.

Now you may be asking yourselves why are we celebrating 50 years today – when the first visit was in 1969?

Let me explain, in September 1972 a formal deputation from Lodge Thistle attended the Aeron Installation meeting and it was at that meeting the Scottish brethren presented the newly installed Master with an inscribed bible, and such a presentation has since been made annually, and has become an established custom.

Since then, a close bond has been established, with reciprocal annual visits, forming a true brotherhood between the two Lodges. This is the reason we are celebrating the 50-year link in 2022.

This journey, a round trip of some 680 miles and 7 hours each way, is a huge commitment for the brethren who undertake these visits. Travel has been by car, mini-bus, coach, camper van, train and by air; sometimes in extremely poor weather conditions. Over the years members of both lodges have been made honorary members of the other.

The thing that stands out more than anything else is the warmth of the friendship between the brethren, which has built up over the years.

This is what Masonry is all about and long may it continue.

The demonstration of the 3rd degree ceremony was conducted by the following Scottish Brethren from Lodge Thistle No.270

Following the ceremony, the brethren were congratulated and thanked by R.W. Bro A. James Ross the P.G.M. of the Province of West Wales who was in attendance.

Numerous visitors from a number of other lodges were also in attendance. A most enjoyable festive board followed, at which a presentation of a Masonic Clock and a glass vase was made to the Aeron Lodge to mark the 50-year link.

A return visit is planned for October, when a deputation of Aeron Brethren will be conducting a demonstration 1st degree ceremony.