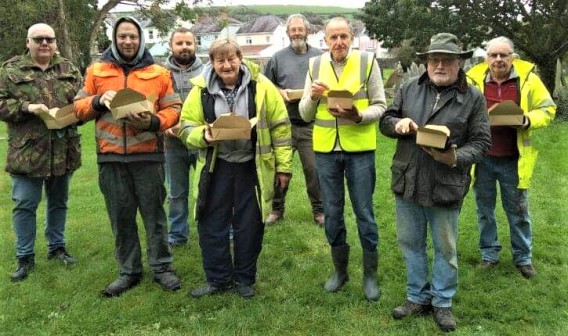 A note of thanks once again from the trustees of the Thomas & Elizabeth Mayhook Charity for the continued help of the Mackworth Club.

The ongoing restoration of the cemetery continued again yesterday with the visit of volunteers from the Mackworth Club of local Freemasons who spent the whole morning working hard and were joined by three trustees and Mr David England - a regular helper and supporter. Luckily the rain kept off and we were able to repair two memorials, a third was also “uprighted” as it was leaning at a 45 degree angle, and a lot of ivy and overgrowth was removed from the surrounding wall. Also grading of the soil of a small section of the cemetery was achieved with the help of Richard Holmes, who once again offered his services free of charge.

The Mackworth Club has visited us on a number of occasions and the Thomas & Elizabeth Mayhook Charity would like to express their thanks and appreciation for their efforts.