Glan is an entertainer and actor from Brynaman, now living in Aberystwyth. His interest in acting started as a child with Moria Chapel Drama group, and they competed and won several Urdd Eisteddfods. Glan was a member of Grwp Bois Brynaman with Dafydd Iwan and the Diliau who raised money towards good causes in the 1960s and 70s. He has acted in several films and in an episode of Pobl y Cwm. Glan is one of the most charismatic MC's in Wales. Glan has done a lot of work for local and national charities including Children in Need, health charities, Aberystwyth Rugby Club, Aberystwyth Football Club.

The Provincial Grand Master, RW Bro James Ross was delighted to preside at the meeting. He also had a little surprise for the new WM. 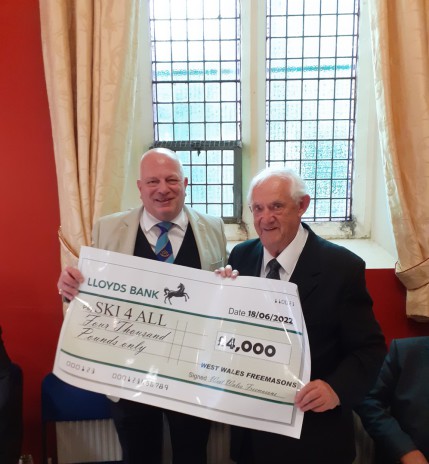 An extract from the PGM's Address

"Brethren, there are three cornerstones to the new UGLE Strategy and the one I want to talk about today is Community Engagement. Community Engagement has lots of different strands, but perhaps one of the most important is finding opportunities to support people less fortunate than ourselves.

A shining example of this is the Peter Drewett Lodge’s support for Ski4All in Pembrey. I understand that you have approved a grant of £550 for this very worthy cause. For those of you who may not be familiar with Ski4All let me read you a little bit about them.

Ski4All consists of men and women who are qualified Physiotherapists, and a semi-retired Neurosurgeon who give their time free of charge every Wednesday to help children and adults who have been born with or through accident been affected by brain damage. The patients Ski down the artificial Slopes in Pembrey, connected to an experienced skier. This gives them an experience of exhilaration, laughter, and enjoyment which they would not receive anywhere else. The best example of the wonderful effect it can have, are the two children that had never in their lifetime spoken a word, who shouted with glee the first time they went down the slope, to the great surprise of their parents.

Brethren, the adapted chairs on skis used for this wonderful activity cost £8,550. Peter Drewett Lodge have donated £550. I have in my pocket a cheque for £4000 which will be topped up by a further £4000 from the MCF, so that the Freemasons of West Wales can purchase a new adaptive ski for Ski4All. Worshipful Master, perhaps you could accept the cheque on behalf of Ski4All and the Peter Drewett Lodge."

Not to be outdone, W Bro Glan, then presented the PGM with a cheque for £1000 towards the 2026 Festival Appeal. 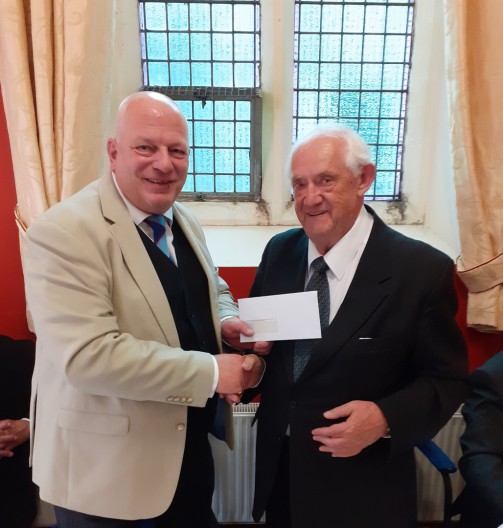