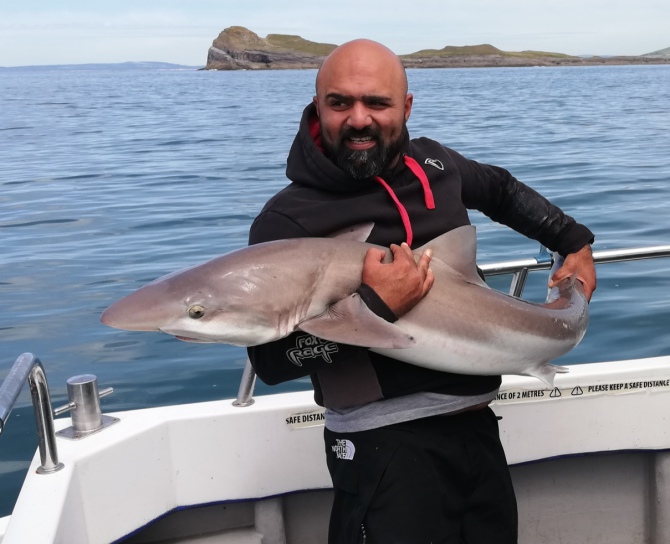 On Thursday 16th June 2022, nine intrepid members of the Mackworth Club set sail from Saundersfoot Harbour for a full day of sea fishing. The trip was the idea of Marc Bassett a very keen fisherman who also makes his living in the fishing industry as he owns Anglers Corner, a fishing tackle shop in Llanelli.

The novices outnumbered the experienced fisherman, but the crew of the Ebony May, Stuart and Gareth, assisted by Marc managed to get everyone sorted out with rigs to catch enough mackerel to use as bait for the day. With a bit of coaching, everyone caught some mackerel and pretty soon there were two big buckets full of mackerel and the fishing could start in earnest.

Ebony May headed for Worm's Head on the Gower Peninsula. A happy hunting ground for a species of shark called Tope. The novices looked a little apprehensive about how wise it was to try and catch a shark, but like all true men they kept their mouths shut and their fingers crossed that they wouldn't be successful.

It didn't take too long before the first big bite and Zain Ikram gamely stepped up to grab the rod and play the fish. Zain is young and fit, and it's just as well because the Tope on the other end of his line was angry and not very keen on joining everyone on the boat. It took 5 or 10 minutes to get the Tope alongside the boat. Stuart opened the hatch and brought the Tope onto the deck.

The Tope was even more cross once it was on the deck, but the experienced Stuart knew just how to handle it, to remove the hook and put it into Zain's arms for the photo. Fortunately, it was quite still once it was being held behind its pectoral fins. Everyone was glad that Zain was doing the honours when they gathered behind him to bask in the reflected glory!

Shortly after the Tope, Mike caught a Bull Huss, which wasn't quite as big and scary as the Tope, but a very nice fish, nevertheless. Over the course of the rest of the day, the group caught Dogfish, Gurnard, Pollock, and more mackerel. The weather was glorious and the company great.

Many thanks to Marc for organising the trip and here's to the next one!