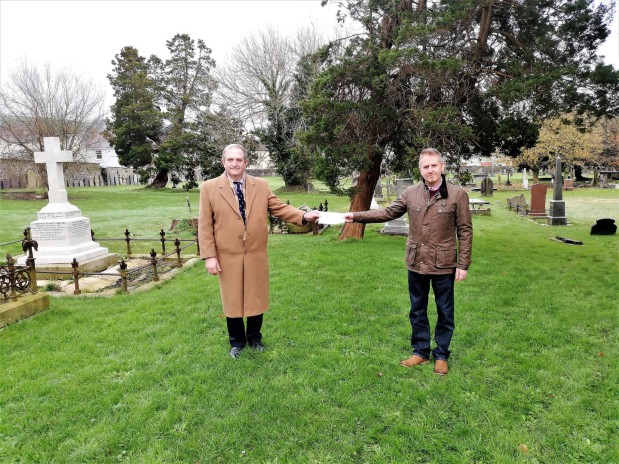 Work is underway for a Cross of Souls to commemorate all those buried in St David's Cemetery with no known grave or headstone. W Bro Marc Bassett, Chairman of the Mackworth Club was delighted to present Richard Goodridge with the final £700 to complete the appeal. The Provincial Grand Master, RW Bro James Ross also attended the presentation, but for a change he was behind the camera, not in front of it.

Read about the presentation on the St David's Cemetery website by cicking here.

Why A Cross of Souls?

For over 16 years, from 1841 until 1856 all the “inmates” for example from the Carmarthen Workhouse were buried in St David’s Cemetery – until the Town Cemetery opened, and even then many were continued to be buried there. Obviously coming from the poorest backgrounds and with poor health also, were given the most basic of funerals with no grave marker to speak of and also all those who died in the Cholera epidemic of the 1840’s which wiped out entire families in a matter of days.

Statistically there are nearly 6,500 burials in the “old” part of the cemetery that occurred between 1841 and 2002 when it closed. Out of these only 1,453 have named memorials, and 362 that have grave markers with no names. This leaves some 4,500 burials with no grave markers whatsoever – in other words “no known grave” The situation is made worse of course because of the loss of the “Burial plan” which would have recorded all the locations of all those buried in specific graves, though it is believed that during the cholera epidemic and for burials of those in the workhouse there were burial “plots” which were in effect multi burials in the same grave.

The Cross of Souls memorial project gathers momentum and I am grateful to the Diocesan Advisory Committee for granting permission for this very special memorial to be erected. Plans are afoot to begin the construction of the concrete base followed by other work and it is hoped that it will all be completed by the end of January, and ready for the unveiling and consecration on February 3rd.

I am also delighted to inform you that the Right Honourable The First Minister for Wales , Mr Mark Drakeford PC will lay the first wreath following consecration and will be followed by Professor Medwin Hughes DL, Vice Chancellor of Trinity St David’s University who will lay a wreath on behalf of the “Friends” of the charity. Further information will appear about this in January.

Thank you all very much for your continued support.