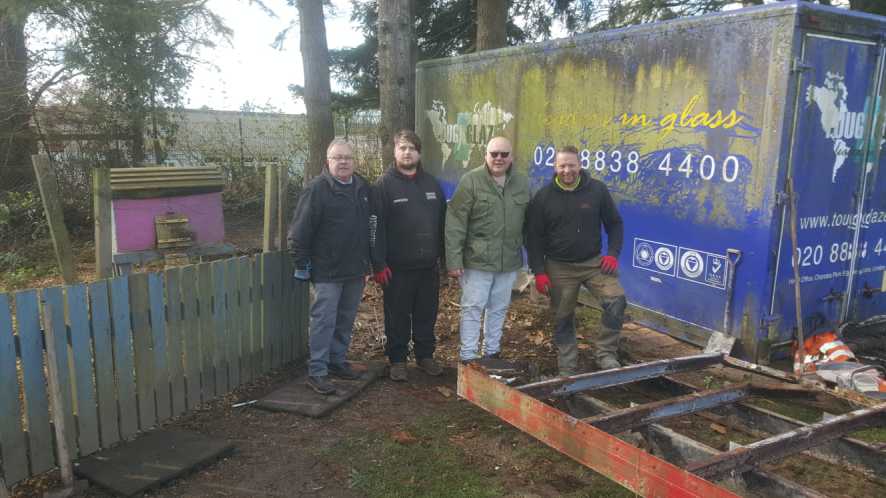 On Saturday 9th April 2022 at the invitation of a School Governor of Nantgaredig Primary School Mr Hywel Rees (also a member of Caerfyrddin Lodge) a team of Mackworth Club members led by their Chairman John Trott but spearheaded once more by Richard Holmes with his array of light and heavy plant, descended on the school grounds to assist with a “small clear up” job.

On arrival this appeared to be the case when the container to be cleared appeared to have less than a dozen items in it. Ten minutes work and then all home for tea and biscuits. That is until the members were told the clearance of the container involved the container itself as it was considered a hazard to the children at the school.

Thankfully due to skilled machine work with his mini-digger Rich was able to demolish the bulk of the container, which was sturdier than it looked at first glance, and then by using an array of saws was able to break the container down even further, which allowed the remaining members to transport the debris to the back of Rich’s lorry for safe disposal.

Two and a half hours after starting the job the rubbish and debris from the container were all in the back of the lorry and once again the Mackworth Club had proven that Mason’s don’t just give money to the community but are also willing to give up their time willingly as well.

Next job is the tidying up of the garden at the Llanelli Centre for the Deaf, keep your eyes peeled for details of when this will take place and how you can get involved.