Love Thy Neighbour - A Familiar Face at Tenby Initiation 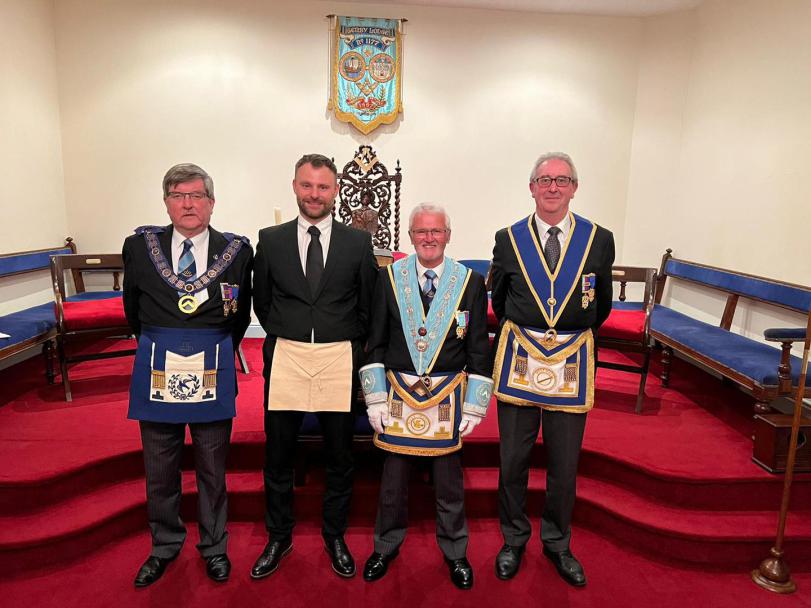 For a second successive meeting the Master of Tenby Lodge, W.Bro. Brian Miller had the pleasure of initiating a new member into the lodge, Bro. Matthew Hughes, and a very welcome guest at the meeting was Bro. Matthew’s friend and next-door neighbour, our Provincial Grand Mentor W.Bro. Chris Harding! Also present was our Deputy Provincial Grand Master W.Bro. Ryland James. The brethren of Tenby thank both for adding so much to the occasion and must congratulate W.Bro. Ryland for his recently announced promotion to Past Grand Sword Bearer, and of course W. Bro Chris for his first appointment to Past Assistant Grand Director of Ceremonies, thoroughly well-deserved in both cases.

When it came to the Toast to the Initiate, it was a ‘no-brainer’ as to who should propose it! W.Bro. Chris’s amusing toast is below

A Hook man as opposed to me who is a man from Hook, he went to Taskers and then to Preston University to study sociology and criminology, so anyone here with dodgy goings on beware! He obtained a master’s degree in social care in 2007. He is very sporty and played cricket for Pembrokeshire, a fast bowler of some note. He played rugby for Llangwm, and at uni he played semiprofessionally in league 2 England for Preston and has his name on the board for highest try scorer, of which he is very proud and lets everyone know about!! He also plays golf about which I am particularly worried. He started work with Pembrokeshire youth offending team, then for a similar team in Preston. He went on to become a senior practitioner for child protection and safeguarding. In 2016 he started his own business called “One Stop Social” which led to the business he now owns called “Creative Living Care” in Pembrokeshire and now also in Plymouth. Matthew is married to Molly and has two children Alma and Emeris.

That is Matthew’s life story, but I know him from living next door to his family for the last 28 years. They have been and continue to be great neighbours. When he was at Taskers he went out with my daughter for a while, but I soon put a stop to that! He is now back living with his mum and dad whilst he is having his house renovated in Yerbeston. About 6 months ago he approached me while we were having a chat over the wall and asked me about the Masons. I did my Mentor bit and gave him some info from Solomon. He later decided that he wanted to join and knowing what a fine fellow he is and a good golfer, I was torn as to whether I take him on in Haverfordwest or send his form onto you at Tenby but being an honest sort of chap, I did the right thing and here he is. I know he will be a credit to your Lodge and in the future would make an excellent Charity Steward. I am very thankful to be asked to propose his toast and look forward to his Masonic career with interest. By the way I have already approached his brother who lives in Hook so hands off!!!