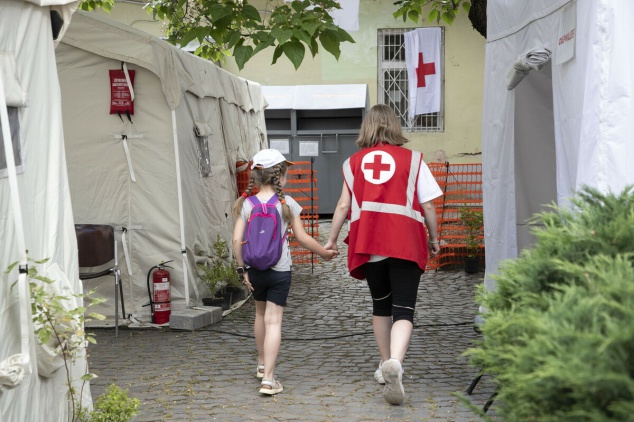 West Wales Freemasons have lent their support to families affected by the conflict in Ukraine by helping to raise a £100,000 donation to the British Red Cross, along with other Freemasons across England and Wales. The grant will support the Red Cross in its work with people seeking safety in the UK who have lost contact with loved ones.

After being torn apart, finding each other can be incredibly hard and many may not know whether their children, partner or parents are alive, let alone where they are. Even when family members are found, the legal process to reunite can be long and complicated, and physically reuniting them is often unaffordable. Thanks to the British Red Cross they can be safely brought together in the UK.

The British Red Cross international family tracing team helps to find missing relatives, with experienced caseworkers, supported by interpreters, finding out how people were separated and where they could be. Those looking for loved ones can also upload a photo of themselves on the Trace the Face website in the hope that their missing family recognise them. If found, they will be able to speak to each other by phone.

The Red Cross can also help families with visa applications and arrange face-to-face reunions with relatives in the UK. Dedicated caseworkers support refugees both practically and emotionally during this long process, helping them deal with the trauma of separation, and supporting them to access accommodation and financial support to maintain their wellbeing. Red Cross teams can also help pay for flights to the UK, for those that cannot afford it.

The Red Cross has been reuniting families since before World War II. Last year they brought together almost 8,000 people separated by conflict. They have a presence in 192 countries, with a vast network can help people in crisis to find missing loved ones in nearly every country in the world.

This latest £100,000 grant from the Freemasons comes after a series of previous grants totalling more than £1 million, helping Ukrainian refugees both in the UK and in Ukraine, as well as in Poland, Moldova and other neighbouring countries.

Freemasons contributed to the grant through the Masonic Charitable Foundation, which is funded by Freemasons, their families and friends, from across England and Wales.

“We’re very grateful to the Freemasons for this generous grant which we’ll use to reunite families torn apart by conflict. For people seeking safety in a crisis, losing contact with family members adds a new layer of trauma, and while the conflict in Ukraine has highlighted that fact, it’s a situation facing countless refugees and people on the move around the globe.

“Bringing families back together is a hard and complex process, but for someone looking for their child, spouse or sibling, it means everything. The Freemasons’ generosity will help us to support these people, whoever they are and whatever they’ve been through.”

“I’m very pleased we’ve been able to help the British Red Cross with this hugely important project to reunite families who have often been scattered across the continent. I can’t imagine a better way for Ukrainian children to celebrate the New Year than to get their  families back in a safe country away from violence.”