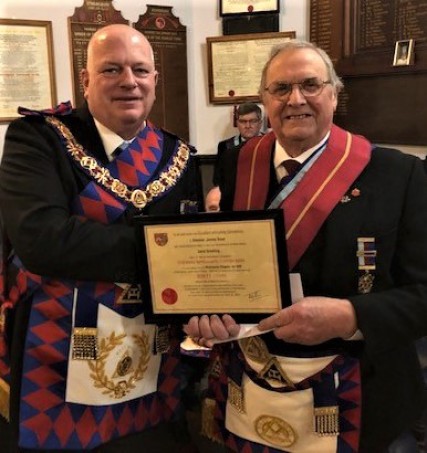 It is a great pleasure to be able to mark a wonderful Holy Royal Arch milestone this evening. I always enjoy presenting Long Service Awards, but this evening’s recipient is much more interesting than the rest of us put together.

You were Initiated into Kemes Lodge no 3152 on 19th January 1968. I was just 2 years old. You finally served Kemes lodge as Worshipful Master in 2015. You have of course been organist too.

You joined Cedewain Lodge no 1594 in Newtown, North Wales in 1981. You joined Kensington Lodge of Installed Masters in 2011 and briefly the Strumble Lodge no 4351 when Kemes and Strumble amalgamated in 2020.

In the Holy Royal Arch, you were exalted into the Welchpool Chapter no 998 in North Wales on the 28th October 1982. You joined the Loyal Welsh Chapter in 2001 where you served as MEZ in 2012. You have also served the Chapter as Organist and in more recent times you have stepped in to be Principal Sojourner and Joshua.

You joined the Abergwaun Chapter in 2007 and served that Chapter as MEZ in 2015. You are currently serving the Chapter as Haggai.

Excellent Companion Dai, your ongoing love for and commitment to freemasonry is clear and I have been privileged to know you for many years. You have always been a committed family man and your devotion to your late wife Nan has been admired by us all.

You rarely mention your career in the police force where you served all over Wales, which explains your slightly erratic choice of lodges and chapters.

Starting as a cadet in Pembroke Dock you served in Haverfordwest, Newtown, Ebbw Vale, Haverfordwest again, Saundersfoot, Fishguard, Aberystwyth, Llanelli and finally back to Pembroke Dock as the Superintendent in charge of the division.

What many people don’t know that one of the many operations you were involved in was so large and dramatic that it was made into a TV Series called Operation Julie in 1985. The whole thing is still available to watch on YouTube and you can watch Dai talking about the operation on the documentary you will find here.

Operation Julie was a major investigation involving 11 police forces and taking 2.5 years finally finishing in 1977 with enough LSD to make 6.5 million tabs being seized. The equivalent value in today’s money would be close to £1 billion. 120 people were arrested and nearly £1 million was traced to Swiss Bank Accounts. The investigation involved 28 drug squad officers, but you were one of only three officers who worked undercover.

Excellent Companion Dai, you are a man with hidden depths, but the strength of character required to be an undercover drugs officer has stood you in good stead throughout your life.

You started learning the piano when you were 6 years old and you have a lifelong passion for playing music. Although you are a classically trained pianist, you also play the organ and more recently the guitar. You play or have played in all the masonic units you’re a member of, as well as many where you’re not a member. You have also played the organ in Monkton Priory Church and Tabernacle United Reform Church in Pembroke. A very impressive record from the boy who won a prize at the National Eisteddfod as a boy soprano in 1952!

E Comp Dai, you are a hardworking and dedicated freemason who has managed to combine his freemasonry with a successful career and a happy home life. Every lodge, chapter and other order which you have supported over the years has been made stronger and more successful by your involvement.

On behalf of everyone I thank you for your dedication to freemasonry in West Wales. I have valued our friendship over many years and I am delighted to be the one presenting you with this certificate and badge to commemorate 40 years’ service to the Holy Royal Arch.