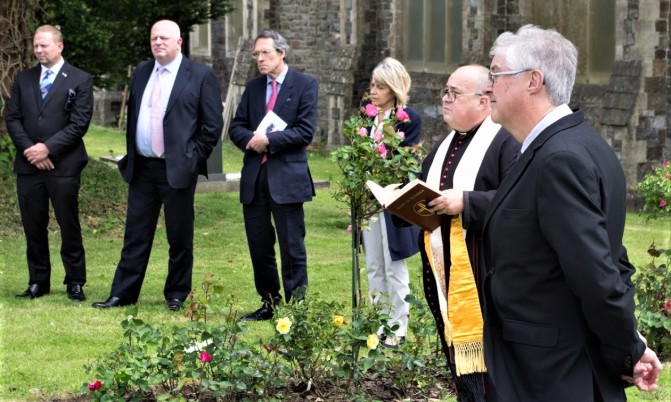 On Monday 21st June the following representatives of the Mackworth Club: Chairman - W. Bro. Marc Bassett, Vice Chairman - Bro Rich Holmes and Social Secretary - W. Bro. John Trott, together with the Provincial Grand Master of the Province of West Wales - Rt. W. Bro. James Ross attended the unveiling and Consecration of the ‘Cross of Souls’ at St. David’s Churchyard Cemetery in Carmarthen as Guests of the Chairman of the Trustees of The Thomas & Elizabeth Mayhook Charity.

This was in recognition of the efforts of the Mackworth Club’s members who have helped in the restoration efforts at the Churchyard over numerous volunteering days, together with a substantial donation towards the purchase and erection of the Cross.

The ‘Cross of Souls’ has been placed in the Churchyard in remembrance of the 5000+ buried within the churchyard who have no gravestone or marker, many, such as those from the nearby Carmarthen workhouse, in paupers’ graves.

The Cross was unveiled by Her Majesty’s Lord Lieutenant of Wales, Sara Edwards and was Consecrated by the Venerable Dorrien Davies, Archdeacon of Carmarthen.

Also present and presenting a wreath was The First Minister of Wales - The Rt. Hon. Mark Drayford MS.

It is testament to the appreciation of the help of the Mackworth Club by the trustees, that at a socially limited attendance of 30 maximum, four members were invited.