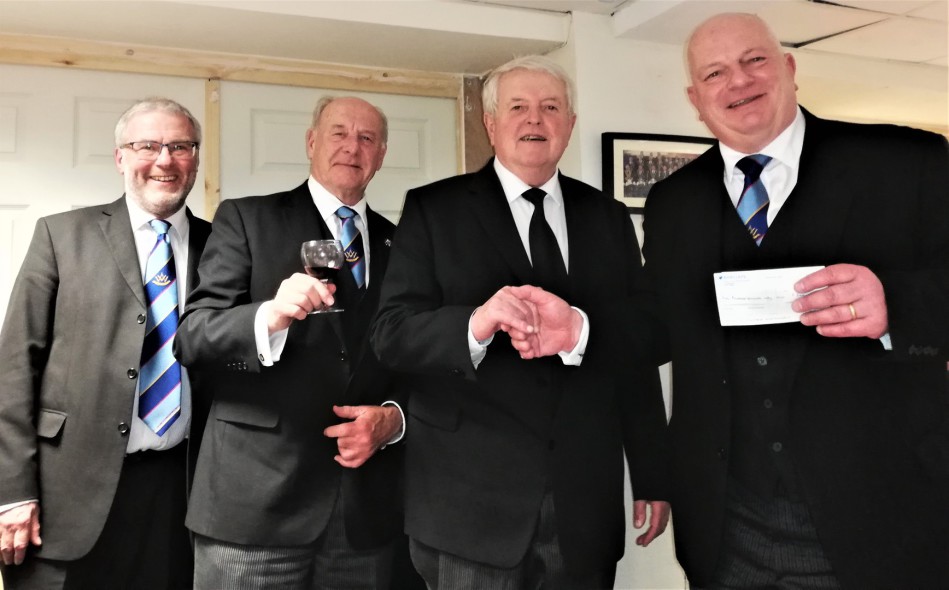 Cambrian Lodge Presentation to the 2026 Festival

RW Bro James Ross, Provincial Grand Master for West Wales was delighted to preside for the first time in his Mother Lodge, at the Cambrian Lodge Installation on Wednesday 16th February 2022.

He was even more delighted when the Provincial Senior Grand Warden, W Bro Tudor Thomas, also a member of Cambrian Lodge presented him with a cheque for £500 towards the 2026 Festival in favour of the Masonic Charitable Foundation.

The money was the residue of a disused account relating to joint social functions organised by the now amalgamated Cleddau and Cambrian Lodges. This account had been administered for many years by W Bro Tudor Thomas, on behalf of Cambrian Lodge and W Bro Ted Hoyle, Provincial Grand Sword Bearer, on behalf of Cleddau Lodge.

RW Bro James said: “I am very grateful for this donation towards our 2026 Festival. I hope all lodges look at their various financial arrangements and identify money in disused accounts which could be dusted off and added towards their festival target.”

W Bro Steve Roscoe, Provincial Grand Festival Steward (Pembrokeshire) added: “The Masonic Charitable Foundation is our charity. It supports freemasons, our wider community, and good causes worldwide. It has distributed more than £100 million since 2016, all of which has come from freemasons and their families. The Provincial Festival system is the cornerstone of masonic fund raising and it will require a huge team effort in West Wales to reach our target of £1.1 million by 2026.”