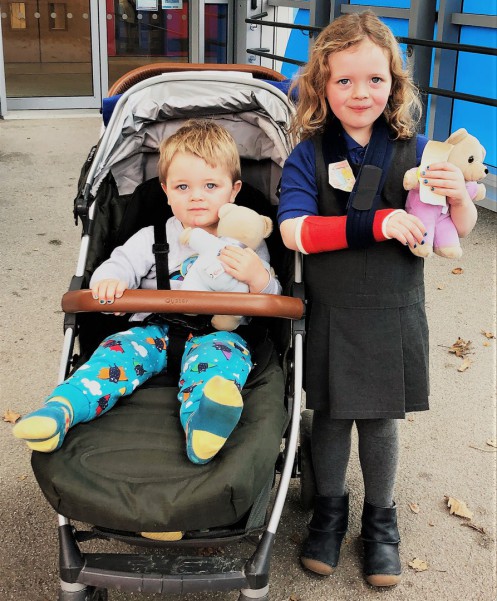 Edward and Connie Nicholas with their TLC Teddies

Freemasons have donated over 2.5 million teddy bears to children in A&E Departments across the UK

In mid-November little Connie Nicholas had a birthday she won’t forget in a hurry. On the day she became 5 years old, she received something she didn’t want….a fractured wrist!

Mum Veronica, took her and her younger brother Edward, who is almost 2 years old, to the A&E dept at Bronglais Hospital in Aberystwyth. Connie was obviously distressed and in pain, but was being brave, so to reward her bravery a nurse gave her a lovely mauve TLC teddy bear….and of course, Edward received a blue one!

Veronica said afterwards “I’d never heard of Teddies for Loving Care (TLC) but our daughter received one which she took with her for her X-ray, and didn’t even look back when I couldn’t go with her! She has cuddled him every night since. He looks after her poorly arm and has been a great comfort.

Thank you so much for the work you have put into providing these bears for children like ours, it made a difficult day much easier. TLC is wonderful and I for one will be shouting out about you guys and spreading the word x”

We are grateful to Veronica for taking the trouble to show her appreciation by writing to us, and for sending a lovely picture of Connie and Edward outside Bronglais Hospital.

TLC was launched by Essex Masons in 2001, and it soon became clear what a popular and hugely successful charity it was. One by one the other Provinces took up the scheme, and now 47 of the Provinces have a TLC programme. When our much-loved brother VW.Bro. Mike Davies met and spoke to the TLC Chairman at a meeting in London in 2004, he immediately saw the value of the scheme. He brought the idea back to the West Wales Executive, and TLC was launched in our Province in 2005. Since then over 30,000 teddies have been given to children traumatised by illness or injury at the 4 main hospitals in our Province: Bronglais, Glangwili, Prince Philip and Withybush. Across the UK, over 2.5 million teddies have now been distributed.

TLC is now administered by the Masonic Charitable Foundation (MCF) and has it’s own website www.teddiesforlovingcare.org.uk.  in which it says:

“The bears are used to calm children down, reward them for being brave or to demonstrate procedures. Often the bears distract children so nurses and doctors can get their jobs done quickly and efficiently. The TLC teddy has become an invaluable tool for medical professionals and a real comfort for children."

One A&E doctor said “having these bears is so helpful, the children love them and they help massively in terms of building rapport with those who are afraid of the situation”

The TLC coordinator for the Province of West Wales is W.Bro. Steve Thurgood - e-mail: tlc.stevethurgood@yahoo.com