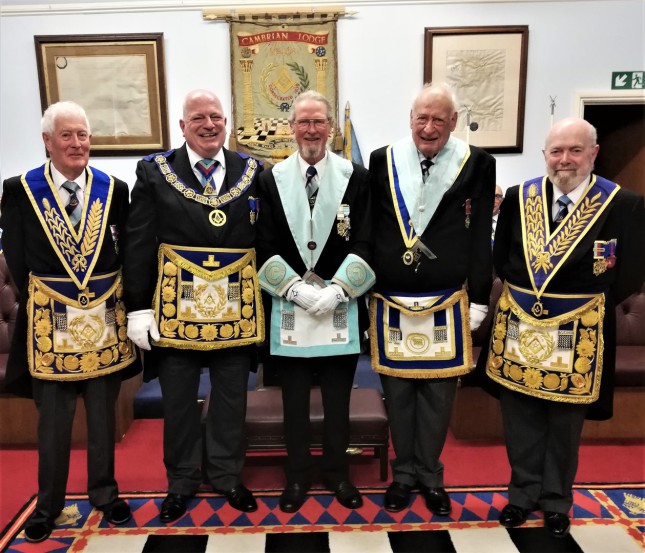 The Installing Master W Bro John Stark did an excellent job, and the combined age of the new WM, Brig Youngs and John is 162 years! It's a well-known fact that freemasonry keeps you young!

The current Provincial Grand Master, RW Bro James Ross was joined by his two predecessors, RW Bro Steve Hookey (PGM 2014 - 2019) and RW Bro Eric Mock (PGM 2008 - 2014). All three of these brethren are members of Cambrian Lodge no 464 in Haverfordwest and the Richard Warburton Lodge no 9767.

RW Bro James was delighted to see his two predecessors taking an active part in the ceremony and it was a red-letter day for the Richard Warburton Lodge and freemasonry in Haverfordwest.

At the Festive Board, the Provincial Grand Mentor, W Bro Chris Harding, also a member of both lodges, gave a most informative talk about the history of freemasonry in Haverfordwest and the current Freemasons Hall.

In January 1812 Hwlffordd lodge was warranted by the ancients as No 23, it was renumbered to 59 and later to 81, it was eventually erased in 1828. We know very little about this Lodge apart from that the original Master and Wardens were members of a Bristol Lodge 162 and 158 and other founder members were from Lodges No 30 Halifax, 296 Manchester, 247 Newfoundland,135 Newport and 73 Scotland, which may indicate a nautical connection? The Hwlffordd lodge was erased eleven years before the warrant for Cambrian Lodge was issued in 1839, however there are direct links in that the founding Master was a Past Master of Hwlffordd and at the first meeting there were at least two other members of Hwlffordd present.

It is interesting to note what Haverfordwest was like in the 1800’s, commercial facilities were afforded by the situation of the Town on the Great Western Road having the London mail coach passing through daily and a Steamer plies weekly between Haverfordwest and Bristol calling at Tenby on Tuesdays and Fridays during the summer.

Listed in the business directory there are 27 boot & shoe makers (nothing changed there then!), 11 straw hat makers, 2 stay makers, 4 tallow chandlers, 15 Taylors, and 15 blacksmiths. The industrial revolution had not reached out here yet ! And last but not least 68 taverns and public houses !

The population was about 5000.

The first meeting of Cambrian Lodge 683 was held at the Mariners Hotel on the 27th January 1840 and subsequently on the Friday next after the full moon.The subs were then 6/- a quarter.

On the 27th July 1869 the Rev’d Phillips granted a 99 year lease on a piece of ground at Picton Place to William Sanders at a rent of £1.00  per annum. This lease contained a number of conditions, the principal one being that the lessee should build on the site a good and substantial Masonic Hall, before the end of September 1872, that it should not be used for residential purposes, and it shall not be used as or for a Roman Catholic Church ,Chapel or dissenting meeting house!

In October 1871 a scheme was set out for raising the sum of £300 towards the completion of the Hall by issuing shares at £5 each there is no record of how much was raised. There is also no record of the total cost of the building but there is a record of wages paid to the workers, Labourers were paid 2/- per day Masons 3 / 4p per day.

The first Lodge meeting was held in the Hall on June 13th 1872 ,when it was recorded, “the Lodge was opened with solemn prayer ,PrG Lodge then entered the building   and the ceremony of consecration commenced when completed the Brethren then attended a divine service in St Mary’s Church and then returned to the Lodge which was closed in due form with solemn prayer. In the evening a banquet took place in the Mariners Hotel.

In 1962 the building, excluding the Lodge Room was leased to Commander Productions for 40 years. For these years it was used for weddings and all sorts of functions. In later years it was RJ’s Night club.

On the occasion of the Centenary Celebration in 1972, The Provincial Grand Master, R.W Bro. Col. G. T. Kelway said these words, “No building will survive the strains of a century of years unless it is built upon sound foundations, of materials of quality, by the devoted service and skill of the workmen. The same is true of every institution: if it is to flourish through the passing of centuries it must be founded upon the principles and standards which are proof against all human criticism, so that it attracts to itself the devoted service of worthy men.

This is what we celebrate today. But we do more than celebrate: by the very act of celebration we acknowledge gratefully, all that we have inherited from those who have gone before, and pledge ourselves to go on building faithfully upon the same foundations”.