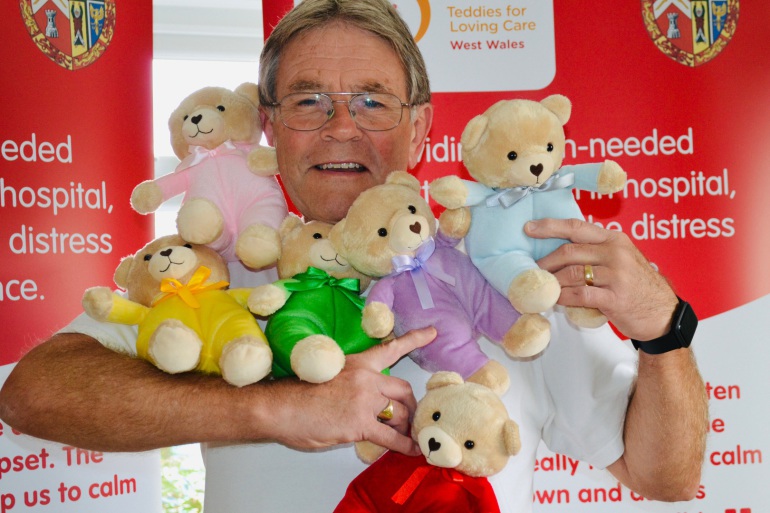 The three millionth teddy to be given to poorly children across England and Wales has been presented, with West Wales Freemasons playing a big part.

The special bear was presented to Jackie James, Play Specialist at Peterborough City Hospital, in the hospital’s Amazon Children’s Garden, by Dr David Staples a hospital Consultant Physician and CEO of the United Grand Lodge of England, the Freemasons’ group behind the Teddies for Loving Care initiative.

West Wales Freemasons have given teddies to thousands of children at hospitals across Hywel Dda University Health Board since the scheme began in 2001. The bears are given to children in hospital to comfort them or reward them for their bravery.

Children are often first met by a bear when they arrive at a hospital Emergency Department to provide comfort and reassurance, in what can be a scary and unknown environment. The bears are used to demonstrate procedures, with doctors and nurses often showing children the procedures on the bear, before performing on children.

“The Teddies for Loving Care bears are very special to us in the Emergency Department and have a wonderful, positive impact on children who are receiving care. When a child first arrives at hospital not only are they feeling unwell but they may also be feeling scared and anxious. The little TLC teddies provide some comfort and really help make them feel at ease.

“I’m delighted to be able to present the three millionth ‘‘Teddy for Loving Care’. As a doctor, who regularly works with children in hospitals, I know how important these bears can be; both for the children who receive them and the staff who give them.

“Teddies for Loving Care is a wonderful scheme. 2 of my 3 children received a bear in our local A&E Department when they were smaller. It’s not that they didn’t have lots of soft toys, it’s just not something you have with you when there’s an accident. I keep one of the bears on my desk to watch over me”

The Teddies for Loving Care (TLC) initiative provides unique cuddly bears to Accident & Emergency departments for medical staff to give at their discretion to young children. The bears are used to calm children down, reward them for being brave or to demonstrate procedures. Often the bears distract children so nurses and doctors can get their jobs done quickly and efficiently. The TLC teddy has become an invaluable tool for medical professionals and a real comfort for children.

The work of TLC is funded through the generous donations of Freemasons, their families and supporters of the programme. Many Freemasons also volunteer hundreds of hours each year to manage the scheme, deliver bears to hospitals, campaign to raise funds and increase awareness through events and talks.

There are 47 regional TLC programmes across England and Wales that provide teddies for their local A&E departments. Once a hospital joins the scheme they can replenish teddies on request through their local TLC representative. Some TLC programmes also donate a portion of their TLC funds towards teddies for minor injuries units, children’s wards and hospices; there are even teddies flying on air ambulances!