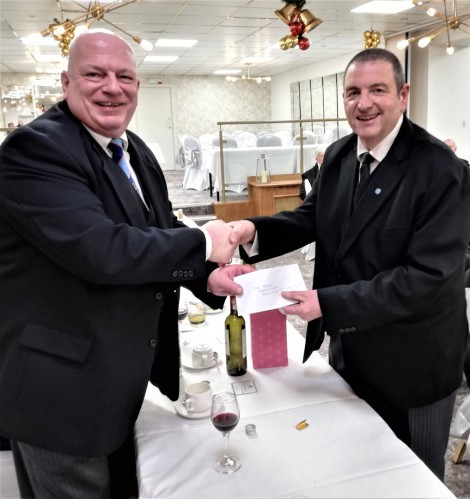 At the St Peter’s Lodge Installation meeting on Tuesday 21st December 2021, the Provincial Grand Master was delighted to accept a donation of £8,000 towards the West Wales 2026 Festival Appeal.

It was certainly a great start to W Bro’s Graham Jenkin’s time as St Peter’s Lodge Charity Steward as he had only taken over the role earlier that evening. A special mention needs to be given to his predecessor and outgoing Charity Steward, W Bro Vernon Edwards who has been St Peter’s Charity Steward since 2009. W Bro Vernon has worked tirelessly for masonic charities during his time as Charity Steward, both on behalf of the lodge and in his role as a member of the West Wales Grand Charity Committee. He is to be commended and we hope he enjoys his well-earned retirement.

James Ross said “I would like to thank St Peter’s Lodge for this wonderful donation towards our Festival. The Masonic Charitable Foundation is one of the largest grant-making charities in the country and it is funded entirely through the generosity of Freemasons and their families. This donation will help us to have a major impact on the future success of the MCF.”