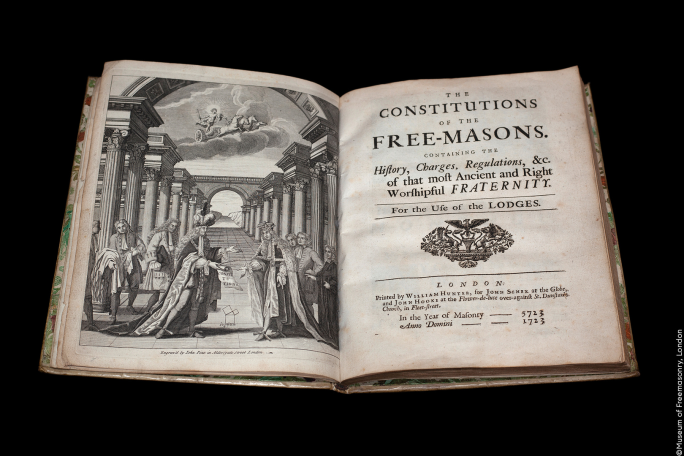 To celebrate the tercentenary of the 1723 Constitutions of Freemasonry, a year-long free exhibition opened on 9 January 2023 at the Museum of Freemasonry. This will be accompanied by national and international events.

Under the banner of ‘1723 – Inventing the Future’, the exhibition at the Museum of Freemasonry features digital displays and items from the collections that have never previously been on public display.

Among them are a personal copy of the Constitutions belonging to the Duke of Montagu, the first noble Grand Master; the box that contained the Duke of Richmond’s miniature working tools; a maul purportedly belonging to Sir Christopher Wren; and a host of rare early and mid-18th-century items relating to Freemasonry and the Enlightenment.

In addition to the exhibition, a dedicated website at www.1723constitutions.com provides a comprehensive picture of the context, content and consequences of this remarkable book.

The website sets out Freemasonry’s principles and considers the people involved, not least that of French Protestant refugees, ‘Huguenots’, and explores the context and framework within which their ideas were formed. It also discusses the impact of the 1723 Constitutions in England, Ireland and Scotland, and in Europe, North and South America, and elsewhere across the globe.

To commemorate the occasion, the United Grand Lodge of England is launching a unique series of podcasts on the 1723 Constitutions, with special episodes on subjects including the following: the Dukes of Montagu and Richmond; Black Freemasonry and Black Freemasons; Royal Freemasonry; and ‘Inventing the Future’.