Palm Sunday - A Message from the Chaplain 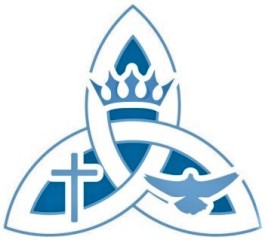 Today the Christian Church in the West is keeping Palm Sunday, as we recall Jesus’ triumphant entry into Jerusalem - the King entering his city victoriously.  The crowd who accompanied Jesus shouted joyfully "Hosanna to the Son of David!  Blessed is he who comes in the name of the Lord! Hosanna in the highest!"  They cut branches from the palm trees (hence Palm Crosses) and put their mantles on the road for Jesus to pass over them as he rode on the back of the donkey.

How quickly things change.  The joyful cries of one crowd turn to the murderous cries of the mob: “crucify him!”  I find those words difficult to say.  Crucify him.

Those who came with Jesus to Jerusalem must have been absolutely devastated.  Seeing their king crowned with a crown of thorns and enthroned on a cross.  Where on earth could they find any hope in this dire situation?

Most of Jesus’ closest followers even had placed all their trust and confidence in the man Jesus.  The one who died on the Cross.  They had not understood Jesus’ teaching of how he was the fulfilment of God’s promise in the Old Testament, that his death on the Cross would free everyone from the rule of sin and death, and establish the glorious freedom of the kingdom of God to all believers.  This was God’s plan from the beginning of time.

In these days of rapid change and great uncertainty, when each and every one of us is concerned, we would do well to note the example of the few that did not desert Jesus: the ones who gathered and wept at the foot of the Cross, the ones who buried him, the ones who saw the empty tomb and only then began to understand the Truth.  God does not give up on us, and so we should not give up on Him.  Rather, even at the darkest hour, where else can we place all our trust and confidence, but in God?  He who is with us always and will not disappoint us, but will ultimately reward us with a crown of glory in his never-ending kingdom.

You may wish to pray these words written originally by JM Neale, or you may like to sing them, or simply reflect on them:

1. O Thou, Who through this holy week
The path of suffering trod,
Our sins to heal, our souls to seek,
And bring us to our God.

2. We cannot comprehend the woe
Thy love was pleased to bear:
O Saviour Christ, we only know
That all our hopes are there.

3. Then grant us, Lord, this week to trace

Thy passion and thy love,

And by thine all-inspiring grace

Uplift our hearts above:

4. Beyond the pain, beyond the cross,

The Christ of glory see,

And count the things of earth but loss

To gain our heaven in thee.