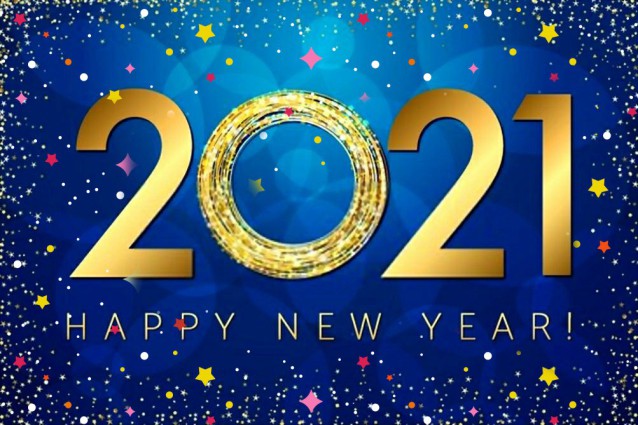 As I mentioned at the end of November, the Church year begins on the First Sunday in Advent, and to be honest I prefer the Church’s New Year to the secular New Year.  I am not a great fan of New Year’s Eve and given the choice prefer to go to bed rather than see in the New Year!  Usually I lament the passing of the old year, and am anxious about the new year.  This year however I am sure that most, if not all, of us will be glad to see the end of 2020 and look forward to the new year full of hope.

The church does not have very much to say about the beginning of the secular year, which makes sense given the importance of the beginning of the liturgical year.  In the Anglican Church 1st January is kept as the Feast of the Naming of Jesus or Circumcision.  A day which recalls the Jewish practice of circumcising male children eight days after their birth, and giving them their name.  A day which reminds us that Jesus was very much a Jew, and of Mary and Joseph’s obedience to the words of the angel that the child was to be called Jesus.

Historically the day has been kept as a fairly low key event, simply because the Church was reluctant to introduce a major day of celebration on what was already a major day of celebration since pagan times, celebrating the birth of a new year.  It’s interesting that from the beginning there has existed a degree of tension between the secular world and the religious world, and it is not something which should surprise us today, or cause us difficulty, but rather encourage us to work with it.

The celebration of the Season of Christmas continues well after the beginning of the secular new year.  While many take down their Christmas decorations, others will retain them until Twelfth Night.  But even then, how much discussion is there as to whether they should be taken down on 6th January or on 7th January?!  Christmas is rounded off with the Feast of the Epiphany, the commemoration of the visit of the sages (traditionally Gaspar, Melchior and Balthasar) to the infant Jesus.  To my mind, this is very much part of the celebration of Christmas while at the same time separate and distinct, and we will retain our decorations (with the holy and ivy looking rather sad by then!) until 7th January!  Other traditions however retain some of their decorations until the Feast of Candlemas on 1st February, but our holy and ivy would have no hope of lasting that long!

This is part of the wealth of the beautiful celebration of Christmas, if it is celebrated as a festival of faith or purely in secular terms.  The variety brings colour and light to all our lives.  Colour and light which is much needed and greatly appreciated this year in particular.

The significance of the visit of the Magi is that Jesus is revealed and shown to all the nations of the world.  The baby is first and foremost a Jew, but God draws to him all the nations of the world represented in the persons of the wise men who were the first non-Jews to visit him.  They trusted God to a point.  They followed the star, not knowing where it would truly lead them.  But then when they thought that they had arrived at their destination, their human instinct kicked in and knowing that they were looking for a king, they naturally went to the palace.

Well, they got that one wrong didn’t they?!  They took their eye off the star, stopped following the light, and followed their own inclinations.  Fortunately they extracted themselves from Herod’s magnificent palace, and this time they followed the star which took them to Jesus’ stable (or cave or whatever) that was his palace.  Not the first place you would look for the king of kings, not the place where you would expect to find the Lord or Lords, but that’s where he was.

The wise men knew when they had found who they were searching for, and they fell down and worshiped him, before presenting their gifts.  Gold, frankincense and myrrh; as the well-known carol reminds us, gold representing Jesus’ reign as king on earth, frankincense representing Jesus’ reign as king in heaven, and myrrh reflecting the early death he was to face on earth before taking his place in heaven.  Birth and death, but a journey in between, as for each one of us.

As much as I dislike New Year’s Eve I also dislike New Year’s resolutions and have never properly engaged with the idea!  I think of it as rather a pointless exercise in truth, if you are going to do something why not just do it?  There is always plenty more that we could and should be doing, but our human limitations mean that we often relent before we should.

As the Season of Christmas gradually draws to a close the Magi remind us that the baby in the manger brings hope and life and light to all who call on his name, and by their example encourage us not to take our eye off the light.  We know from the experience of 2020 how difficult this can be, but perseverance and persistence is ultimately rewarded.  We place all our trust in God and equipped with hope and strength, we endeavour to follow his light wherever he made lead us in this New Year, knowing that he will guide us to the ‘right’ place in the end.

William Chatterton Dix’s (1837-98) Epiphany carol speaks of the journey we are all making, as we travel nearer to God, but at the same time with God:

As with gladness men of old
did the guiding star behold,
as with joy they hailed its light,
leading onward, beaming bright:
so, most gracious Lord, may we
evermore be led to thee.

As with joyful steps they sped
Saviour, to that lowly manger-bed,
there to bend the knee before
him whom heaven and earth adore:
so may we with willing feet
ever seek thy mercy-seat.

As they offered gifts most rare
at that manger rude and bare,
so may we with holy joy
pure and free from sin's alloy,
all our costliest treasures bring,
Christ, to you, our heavenly king.

Holy Jesus, every day
keep us in the narrow way,
and when earthly things are past,
bring our ransomed souls at last:
where they need no star to guide,
where no clouds thy glory hide.

In the heavenly country bright
need they no created light
thou, its light, its joy, its crown,
thou its sun which goes not down;
there for ever may we sing
alleluyas to our king.

Lord God, go with us while we travel to the heavenly country; that following thy star, we may not wander in the darkness of this world’s night, while thou, who art our Way, and Truth and Life dost shin within us to our journey’s end; for thy mercy’s sake.  Amen.

I pray God’s blessing on you in the New Year