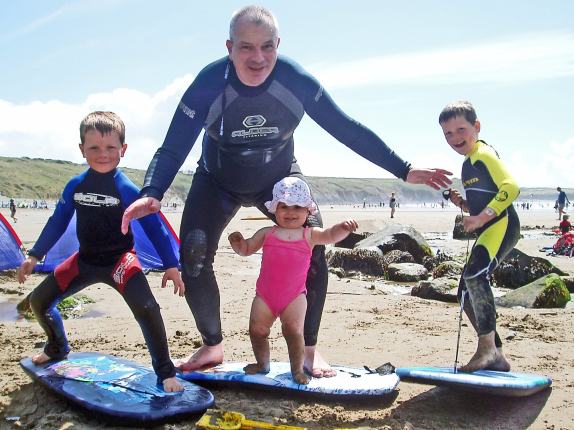 Today is Fathers’ Day, and I have to be honest that I struggle every year with Fathers’ Day!  Not because I don’t get on with my father - thankfully we get on pretty well together (!) but rather because it always falls on a Sunday, and I feel that the Church has little to offer.  At least in contrast to Mothering Sunday, which while not a traditional celebration of the Church, has developed some beautiful liturgies and customs.

The Fathers’ Day which we keep today is an American invention and has been kept since 1910. Sonara Smart Dodd heard a sermon on Mothering Sunday and felt strongly that fathers should be honoured in a similar manner.  Her father was a veteran of the American Civil War and raised a family of six children on his own.  The minister of the Presbyterian Church she attended was drawn to the idea, although he was too busy to be able to accommodate the celebration on Dodd’s father’s birthday on 5th of June (all ministers only working one day a week!) and so it was deferred to the third Sunday in June.

The practice was slow in gaining momentum and only really took off when the retail sector saw the potential for lucrative returns from another commercial opportunity!  In this country Fathers’ Day became widely popular only after the Second World War and it is therefore quite a recent commemoration.

In many Catholic countries Fathers’ Day is celebrated on 19th March which is the Feast Day of St Joseph, the husband of Mary the mother of Jesus. We don’t hear a great deal about Joseph but what we do is precious. We know that he was faithful to Mary, and faithful to God, in the most unlikely of circumstances. I do wonder how I would have reacted to Mary’s incredible account of the visit of the angel Gabriel and his even more incredible message. We know of Joseph’s care for his little family during those early years. We believe that Joseph took Jesus under his wing and taught him his craft as a carpenter. The little we know is that of a loving, caring father.

Jesus on the other hand appears to give his family something of a rough ride. When Mary and Joseph find the missing boy Jesus in the Temple he shows no sign of remorse or compassion, but we are told that after that he is obedient to them. During Jesus’ ministry his apparently thankless response to his parents is explained. When he is told that his mother and brothers are outside wanting to talk to him, he responded:

The point that Jesus is making is that even the family relationship close as it can be, is not the most important relationship, but rather the relationship of the family of faith with each other, and primarily with God. Jesus realises that this is a huge ask, and goes further with words which I find truly shocking:

In light of this, at first sight it appears strange that Jesus chooses to refer to God as “my Father who is in heaven”. In the Old Testament the Hebrew name for God (“Yahwe”) was not normally spoken out of respect for its holiness. In its place readers used “LORD” which is what appears in most modern translations, printed in capital letters to draw attention to the substitution. The usual word for God is “Elohim” a complex word which emphasises God’s holiness and his relation to his people.

Jesus however teaches us to call God not only his Father, but our Father – my Father. All language, every name, in relation to God is very limited because God is beyond everything that we know or can begin to imagine. Jesus therefore takes what we are capable of knowing and understanding, the relationship of an earthly father, and says that our relationship with God is infinitely superior even to that. A similar idea to the way we consider each other as brothers.

I am always mindful that not everyone is able to experience a happy relationship with their father, which is why it is important to remember that Jesus is talking about ideals. He is teaching us a new way of addressing God, and helping us to understand the new intimate and personal relationship between God and us, through Jesus himself.

I pray that this Fathers’ Day will be more so much more than a much needed boost to the economy(!), and that by reflecting on Jesus’ challenging words in relation to family and fraternal relationships, we will be able to enter into a deeper relationship with God our Father in heaven.

This hymn by Robert Stephen Hawker (1804-1873) fails the inclusive language test but contains some beautiful expressions:

And I offer this prayer:

Almighty God our Heavenly Father, whose blessed Son did share at Nazareth the life of an earthly home: we beseech thee to bless our homes, and our families, and to keep us in our going out and coming in.  Grant us day by day thy strength and protection; watch over us in times of danger and necessity; and unite us with each other in thy steadfast fear and love.

So mote it be.