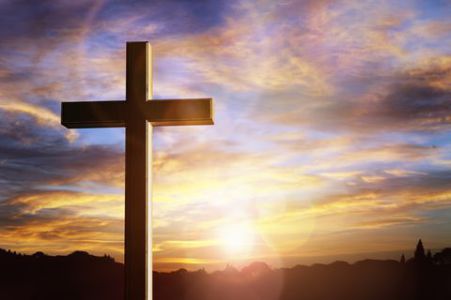 Every year Christians make an annual journey in the footsteps of Jesus Christ, the two main points of reference being the celebrations of his birth and resurrection.  A journey which begins in late November or early December at the beginning of Advent, and which ends at the Feast of Pentecost at the sending of the Holy Spirit after the Ascension.

The overall journey is broken down into smaller journeys, one of the most significant of which is the Season of Lent.  Even today, many people are familiar with the idea of ‘giving up something for Lent’ even if they are oblivious to the origin and purpose of the practice, let alone the additional and potentially more beneficial ‘doing something extra for Lent’.

Lent is one of the longer journeys, and its penitential and often somber mood can make it something of a slog!  At the beginning of Lent on Ash Wednesday, the image which came to my mind was that of a very long and dark tunnel which we had just entered.  We were traveling forward, slowly, there was a bit of a gradient, we were going uphill, the ground was uneven under our feet, and all was dark except for the smallest pin prick of light at the very end of the tunnel.

As we journeyed forward slowly but surely the pin prick of light gradually grew larger and larger.  When we got to the last week of Lent (Holy Week), at the end of the tunnel we could also make out a silhouette of a cross.  As we drew nearer, we could see that the cross was blocking our way out of the tunnel.  We couldn’t turn back and we had to come to the foot of the cross, which we did on Good Friday, and gazed on the one who hung on the Cross as he died.

Suddenly the light behind the cross, at the end of the tunnel disappeared, and we were plunged into the deepest darkness.

The images of a journey, light and darkness are familiar and have been adopted and powerfully applied by masonry in general as well as by various faiths.  They convey more than many words, and enable us to relate and apply individually of our own journey, of our own light and of our own darkness.

On Easter Day, we emerge from the tunnel through which we have travelled, and are blinded by the glorious light which engulfs us.  However, I am always struck by the very gentle way in which the Gospel narratives lead us into the reality of Jesus’ resurrection from the dead.  The response of those first witnesses is that of confusion, uncertainty and disbelief.  Perfectly natural responses to such an incredible event, to the mystery which has happened.

Only gradually, as Jesus reveals himself to more and more people, does the reality of the situation manifest itself – ‘Alleluia Christ is risen, he is risen indeed, Alleluia, Alleluia’.  The body and weight of evidence builds as a result of personal encounters with the risen Lord.  However we have to question ‘who do we believe, and what do we believe’?  In an age when there is so much fake news and manipulation of what has happened and is actually happening, they are reasonable and sound questions to ask when considering what we read in the Gospels, especially when testing such a fantastic claim.

Orthodox Christians believe that the Bible contains the Word of God, and it therefore follows that they believe that it is the Truth, but truths which have to be understood.  If we were to question, I would venture to say that the resurrection accounts have more than a ring of truth to them.  They offer a very human response, very honest responses, and those involved need time and space to think about all that has happened.  There doesn’t appear to be any spin or propaganda at work.

The Lenten journey was difficult this year, again.  We may have come out of the darkness of that tunnel and are bathed in the light of Easter, yet those realities which contributed to the difficulties are still with us: the war in Ukraine, the dramatic increase in Covid cases, the ever escalating cost of living.  Are we truly in the light or are we simply deceiving ourselves?

Perhaps we need to be careful about how we understand ‘resurrection’.  The very word implies a greater sense of continuation or re-starting, than it does of new beginning.  Jesus’ resurrection contains important elements of both.  Jesus was raised to new life in the body, but he was different.  He was not the same as what he was before, but he was still Jesus.

Christians share in the new life of Jesus.  We continue our life in a broken world, but on Easter Day we are renewed and reinvigorated by the knowledge that the things of this world, that all the trials, tribulations and difficulties which we experience belong to this fallen world.  Christians are transformed as people of faith, upheld and supported, knowing that Jesus has defeated everything the world could throw at him - including death, and that his presence enables us to bear all these things on our journey.

Knowing that Jesus is Truth and placing ourselves in his hands, we trust that the end of this mortal journey, will not be the end for us.  That, in God’s time, when the time comes our bodies will be raised and transformed on the Last Day.  This belief transforms who we are and what we are, and how we live our life day by day and everything we have to negotiate .  This we especially celebrate and rejoice in on Easter Day above every other day.

This hymn by Charles Wesley uses a wealth of imagery to convey the profound mystery and great wonder of the Resurrection:

Love’s redeeming work is done;
fought the fight, the battle won:
lo, our Sun’s eclipse is over,
lo, he sets in blood no more.

Vain the stone, the watch, the seal;
Christ has burst the gates of hell;
death in vain forbids his rise;
Christ has opened Paradise.

Lives again our glorious King;
where, O death, is now thy sting?
Dying once, he all doth save;
where thy victory, O grave?

Soar we now where Christ has led,
following our exalted Head;
made like him, like him we rise;
ours the cross, the grave, the skies.

Hail the Lord of earth and heaven!
Praise to thee by both be given:
thee we greet triumphant now;
hail, the Resurrection thou!

O God, who through the mighty resurrection of thy Son Jesus Christ has delivered us from the power of darkness and brought us into the kingdom of thy love: Grant that as he was raised from the dead by the glory of the Father, so we also may walk in newness of life and seek those things that are above, where with thee O Father and the Holy Spirit, he liveth and reigneth for ever and ever.  Amen.

May I wish you and your loved ones the joy of Easter in all its glorious radiance, and that you will know God’s company on your journey.